Don't wait! Call Certified Pest Control NOW! We service from Youngstown to Port Clinton, Cleveland to Columbus and everywhere in between!

Get rid of spiders and keep them under control!

We specialize in getting rid of Bed Bugs with our safe heat killing method!

Spider Control is a 6 step process

To control an infestation of spiders or to simply control their presence in your home or office building we will take the following 6 step approach:

Our 6 steps to control spiders

Common Spiders local to our area (Black Widows are not in our area!)

The most common spider found in our area is the house spider. It also goes by the name of American House or Domestic Spider. It is most often found indoors as the name implies. It is not poisonous but just a nuisance to humans. It is pictured here in it's normal position hanging upside down in a web. 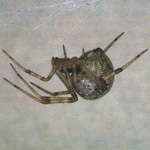 A dangerous and poisonous spider found in our area is the Brown Recluse spider. It commonly has a violin or fiddle pattern on its "back". Typically found in areas that are not disturbed often, these venomous spiders are a very real threat to us. A bite from the brown recluse may not be felt immediately but will result in damage to the tissue around the area of the bite. Immediate medical attention is needed after receiving a bite from this spider.

Given it's name from the fact that it often hitches rides in cars or trucks traveling on highways, these were previously known as the aggressive house spider. Their bite is capable of producing a slow healing lesion. The Hobo Spider prefers to live in any structure that has tunnel like properties. They are not good climbers and are often found in lower areas near ground level. 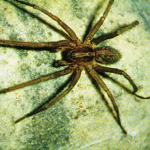 Aptly named from the retreat they build where they spend most of their time which is flattened sac or tube. Yellowish or pale green in color these spiders do not build webs. Altough they are responsible for many spider bites, these spiders are more of a nuisance pest than a threat. Typically their bites result in a pain at the bite site and some redness or swelling for a day or two. In some cases more severe symptoms may result. 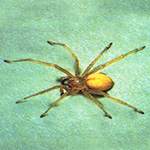 You guessed it, they get their name from jumping up to catch their prey. Occasionally mistaken for a Black Widow Spider and are unusually active in the day light. They can jump up to 20 times their body length! 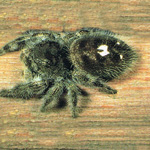